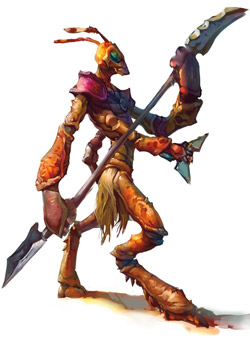 Thri-kreen are mantis like humanoids that hunt in packs throughout the wastes of Athas. They have adapted to the harsh climate and are experts at surviving with only scarce resources. Thri-kreen are nimble, and many also have psionic abilities.
The insectoid thri-kreen have six limbs and are covered in tough, sandy-colored chitinous plates. Their lowest pair of limbs is used as legs, and their upper pair of limbs serves as arms. The middle set of limbs is small but dexterous, and the thri-kreen use them for fine manipulation, leaving heavy work to the stronger upper arms. Both the middle and the upper pairs of limbs have three clawed fingers and one opposable thumb. In combat, thri-kreen hold weapons or shields in their upper limbs, since the middle pair lacks the strength for this purpose and using both sets of limbs would be awkward and unwieldy.

THRI-KREEN TRAITS
Your thri-kreen character has an assortment of natural abilities.