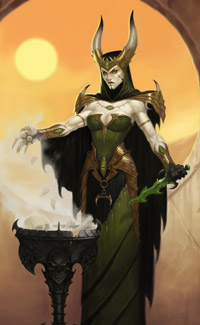 Templar is just another name for the Warlock class in the world of Athas. You get all the class features of the Warlock as presented in the PHB, unless otherwise noted.

Proficiencies
As presented in the PHB, but replace Religion skill for Politics—this is a new skill. You also get the ability to read and write any language you know at character creation.

Your pact is with a Sorcerer-King (detailed below). The Archfey, the Fiend and the Great Old One are not available to you.

Your patron is one of the sorcerer-kings, powerful defilers and tyrant rulers of the city-states. Work out with your DM whom do you serve, and in what city.

Expanded Spell List
The Sorcerer-King lets you choose from an expanded list of spells when you learn a warlock spell. The following spells are added to the warlock spell list for you.

Tyrant Presence
Starting at 1st level, your patron bestows upon you the ability to project its overwhelming and fearsome presence. As an action, you can cause each creature in a 10-foot cube originating from you to make a Wisdom saving throw against your warlock spell save DC. The creatures that fail their saving throws are all frightened by you until the end of your next turn.
Once you use this feature, you can’t use it again until you finish a short or long rest.

King’s Ward
At 6th level, you learn to magically ward yourself against attack and to turn an enemy’s failed strike into good luck for yourself. When a creature makes an attack roll against you, you can use your reaction to impose disadvantage on that roll. If the attack misses you, your next attack roll against the creature has advantage if you make it before the end of your next turn.
Once you use this feature, you can’t use it again until you finish a short or long rest.

Thought Shield
Starting at 10th level, your thoughts can’t be read by telepathy or other means unless you allow it. You also have resistance to psychic damage, and whenever a creature deals psychic damage to you, that creature takes the same amount of damage that you do.

Create Thrall
At 14th level, you gain the ability to infect a humanoid’s mind with the psionic power of your patron. You can use your action to touch an incapacitated humanoid. That creature is then charmed by you until a remove curse spell is cast on it, the charmed condition is removed from it, or you use this feature again.
You can communicate telepathically with the charmed creature as long as the two of you are on the same plane of existence.