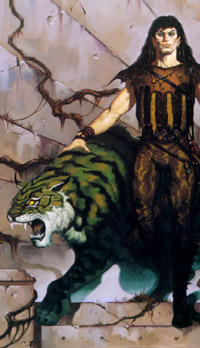 In Athas the wilderness is harsh and unforgiving, calling for skilled and capable men to master its ways—the ranger answers that challenge.
A ranger’s motivations can vary greatly. For instance, human rangers are very often former slaves forced into the desert wilderness for simple survival. Halfling rangers, on the other hand, are an integral part of their aboriginal society, serving as advisors and trackers. Whatever their origin, all rangers are of good alignment, living rugged lives through clever mastery of their surroundings.

Giving the low-magic nature of the Dark Sun® setting. We suggest using the spell-less ranger presented in the Unearthed Arcana article at the official D&D website.
Nonetheless the ranger class can be used as presented in the PHB® without further change, since they cast spells much as druids do.