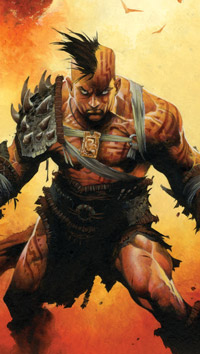 Muls are half-dwarves, descended from the union of a human and a dwarf. They have the stature, agility, and mental flexibility of humankind, coupled with the physical resilience and endurance of dwarves—a rare combination of qualities that makes muls more than a simple blend of the two races.
Because they are strong, tough, quick, and blessed with fantastic endurance, muls are highly prized as slaves. In fact, most muls are born into slavery.

MUL TRAITS
Your mul character has an assortment of inborn abilities, heritage of both human and dwarf parents.