The World of Athas

“Athas is an endless wasteland, yet it has a majestic and stark beauty. When first light casts its emerald hues over the Sea of Silt, or when sunset spreads its orange flame over the Mekillot Mountains, the world’s feral beauty stirs the untamed heart in each of us. It is a call to take up spear and dagger, to flee the cities, to go and see what lurks out in the barrenness.”
—The Wanderer’s Journal 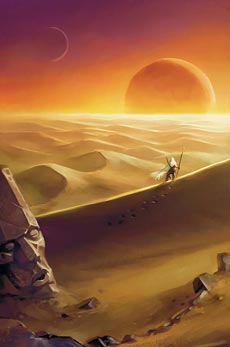 Dark Sun® it’s not your typical heroic fantasy setting inspired by Lord of the Rings, this is a unique setting where nothing is what you’re used to. So, to begin with your adventure, here are some things you need to know:

1. THE WORLD IS A DESERT
Athas is a hot, arid planet covered with endless seas of dunes, lifeless salt flats, stony wastes, rocky bad lands, thorny scrublands, and worse. From the first moments of dawn, the crimson sun beats down from an olive tinged sky. Temperatures routinely exceed 100 degrees F. by midmorning and can reach 130 degrees or more by late afternoon. The wind is like the blast of a furnace, offering no relief from the oppressive heat. Dust and sand borne on the breeze coat everything with yellow-orange silt.

2. THE WORLD IS SAVAGE
Life on Athas is brutal and short. Bloodthirsty raiders, greedy slavers, and hordes of inhuman savages over run the deserts and wastelands. The cities are little better; each chokes in the grip of an ageless tyrant. The institution of slavery is widespread on Athas, and many unfortunates spend their lives in chains, toiling for brutal taskmasters.

3. METAL IS SCARCE
Most arms and armor are made of bone, stone, wood, and other such materials. Mail or plate armor exists only in the treasuries of the sorcerer-kings. Steel blades are almost priceless, weapons that many heroes never see during their lifetimes.

4. ARCANE MAGIC DEFILES THE WORLD
The reckless use of arcane magic during ancient wars reduced Athas to a wasteland. To cast an arcane spell, one must gather power from the living world nearby. Plants wither to black ash, crippling pain wracks animals and people, and the soil is sterilized; nothing can grow in that spot again. It is possible to cast spells with care, preserving the world and avoiding any more damage to it, but defiling offers more power than preserving.

5. SORCERER-KINGS RULE THE CITY-STATES
Terrible defilers of immense power rule all but one of the city-states. These mighty spellcasters have held their thrones for centuries; no one alive remembers a time before the sorcerer-kings. Some claim to be gods, and some claim to serve gods. Some are brutal oppressors, where others are more subtle in their tyranny.

6. GODS ARE SILENT
Long ago, when the planet was green, the brutal might of the primordials overcame the gods. Today, Athas is a world without deities. There are no clerics, no paladins, and no prophets or religious orders.
In the absence of divine influence, other powers have come to prominence in the world. Psionic power is well known and widely practiced on Athas; even unintelligent desert monsters can have deadly psionic abilities. Shamans and druids call upon the primal powers of the world, which are often sculpted by the influence of elemental power.

7. FIERCE MONSTERS ROAM THE WORLD
The desert planet has its own deadly ecology. Athas has no cattle, swine, or horses; instead, people tend flocks of erdlus, ride on kanks or crodlus, and draw wagons with inixes and mekillots. Wild creatures such as lions, bears, and wolves are nonexistent. In their place are terrors such as the id fiend, the baazrag, and the tembo.

8. FAMILIAR RACES AREN’T WHAT YOU EXPECT
Typical fantasy stereotypes don’t apply to Athasian heroes. In many D&D® settings, elves are wise, benevolent forest dwellers who guard their homelands from intrusions of evil. On Athas, elves are a nomadic race of herders, raiders, peddlers, and thieves. Halflings aren’t amiable riverfolk; they’re xenophobic headhunters and cannibals who hunt and kill trespassers in their mountain forests. Goliaths or half-giants, as they are commonly known are brutal mercenaries who serve as elite guards and enforcers for the sorcerer kings and their templars in many city-states.