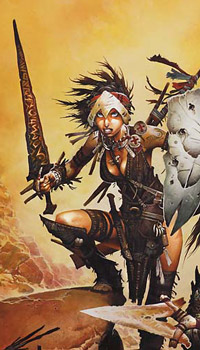 A resourceful and hardy race, humans are the most numerous and diverse people in the Tyr Region. They can be found in every social stratum and situation: city dweller and desert villager, nomadic herder and merchant trader, pampered noble and wretched slave. Humans’ drive, ambition, and ingenuity help the race survive on the dying world and thrive under the rule of the sorcerer-kings.
Athasian humans come in all shapes and sizes, but they reflect certain predominant traits common to particular city-states. Humans in Draj, for example, have broad chins, bronze skin, and black hair that hardly ever grows on their faces. Humans from Gulg have dark brown skin and rounder features with thick, curly hair. Tyr’s humans are varied because that city-state’s population is a conglomeration of humans from throughout the world. Regardless of their origins, all humans are given to unusual traits­ such as odd skin or eye color, exaggerated features, or lack of body hair-that might be effects of the magic that brought ruin to the land. Such traits are common and rarely elicit more than a glance.

HUMAN TRAITS
Use all the human traits as described in the PHB® with the following changes: