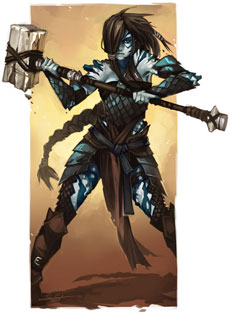 Centuries ago, sorcerer-kings magically combined giant and human stock to breed powerful minions, creating the hardy race of towering warriors known as goliaths (commonly called half-giants). Most sorcerer-kings have hundreds of goliaths in their armies and shower the mighty warriors with luxuries in exchange for their loyalty. Other half-giants become urban thugs or mercenaries. They adopt the culture and traditions of the cities in which they dwell.

GOLIATH TRAITS
Use all the goliath traits as described in the Elemental Evil Player’s Companion® with the following changes: