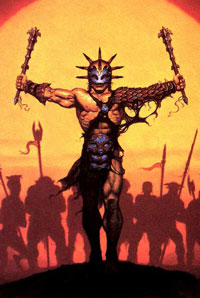 On Athas, the fighter is a trained warrior, a soldier skilled in mass warfare. Every society on Athas maintains an army of fighters to protect itself from attack or to wage wars of plunder and annihilation against its neighbors. Fighters are both the com- manders and soldiers in these armies, and at higher levels are experts in both individual and formation combat, leadership, and morale.

You get all the class features from the Fighter class as presented in the PHB, unless noted otherwise.

Martial Archetype
The Eldritch Knight archetype is not available in Athas.

As mentioned, the Eldritch Knight is not available in Athas, instead you can choose between the Champion, the Battle Master and the new Gladiator archetypes.

The life of a gladiator is brutish and brief, but it is the one occupation a slave can hold that also brings respect. Gladiators are heroes to the common people. Their trials and victories are the stuff of legend, and many slaves grow comfortable from the accolades their conquests bring.

Pit Fighter
When you choose this archetype at 3rd level, you gain advantage in any grapple check you make. Also, whenever an enemy tries to grapple you and fails, you can use your reaction to try and grapple the attacking creature back—make new rolls for this attempt.
Additionally, you are well trained in fighting with your bare hands, your unarmed strikes use a d4 for damage. At 10th level, this dice turns into d6. And at 18th level, it turns into d8.

Bloody Entertainer
Starting at 7th level, you gain proficiency in the Performance and Intimidation skills.
In addition, you can try to sway the crowds or distress a foe with flourishes, trash-talking and fancy moves. You gain the following features.
Roar of the Crowd. As a bonus action, you can make a Charisma (Performance) check, the DC is determined by the DM according to the mood of the crowd: 10 if the crowd loves you, 15 if the crowd is neutral, and 20 if the crowd is hostile towards you. If you succeed in the check, you get a d8 confidence die. When you make an attack roll against a creature, you can expend one confidence die to add it to the roll. You can use this die before or after making the attack roll, but before any effects of the attack are applied.
Shrug off the Wimp. As a bonus action choose a target enemy, you then make a Charisma (Intimidation) check contested by the target Wisdom (Insight) check. If your check succeeds, you get a d8 intimidation die. When the target enemy damages you with a melee attack, you can use your reaction to expend your intimidation die and shrug off some of the damage, reducing it by the number you roll on your intimidation die + your Constitution modifier.
You can only have one confidence die and one intimidation die at a time. At 10th level, your confidence and intimidation dice turns to d10s. And at 18th level, they turn into d12s.

Dirty Fighting
At 10th level, you’ve mastered dirty tricks and cheats to make the best out of your strikes. Once on each of your turns when you hit a creature with a melee attack, you can use your bonus action to impose one of the following effects on that target:

The saving throw DC for your Dirty Fighting effects is 8 + your proficiency bonus + your Strength or Dexterity modifier (your choice).

Uncanny Dodge
Starting at 15th level, when an attacker that you can see hits you with an attack, you can use your reaction to halve the attack’s damage against you.

Death and Glory
When you reach 18th level, whenever you’re close to death you get an adrenaline rush, excited to go out of this world in the most glorious way! Whenever you’re down to one quarter of your maximum hit points (rounded down), you get advantage in every attack roll you make. This strenuous feat of combat causes your wounds to bleed, you take 1d4 necrotic damage at the end of each of your turns in which you used the attack action.