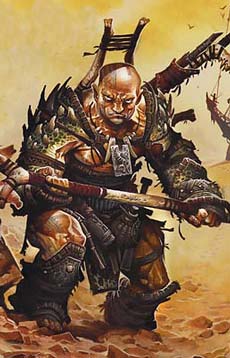 The dwarves of Athas have the stature of their kindred in other worlds short, sturdy, and thickly muscled. Most dwarves have deep tans from lives spent toiling in the hot sun, with wide, callused hands and feet. They usually have little or no hair; the flowing beards that are the pride of male dwarves on other worlds are never seen on the Athasian variety.
Dwarves are known for their stoicism and single mindedness. They fix their minds on the task at hand, whether it is a challenging feat of engineering, an intricate work of craft, a struggle for survival, or a quest for revenge. It’s just not in their nature to abandon a task or leave work half done; dwarves set aside the object of their focus only after much grumbling and coercion.

DWARF TRAITS
Use all the dwarf traits as described in the PHB® with the following changes: