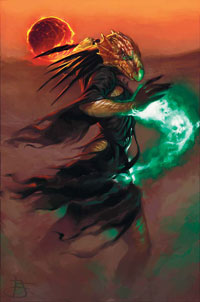 Created many centuries ago by the sorcerer-king of Giustenal to serve as a race of sorcerous warriors, dragonborn—or dray, as they call themselves—are a strong, resilient race of dragonlike humanoids. Most dray were cast out of their home by their creator, Dregoth, and a handful of dragonborn survived when Giustenal was destroyed. From those ancient refugees arose a race of mercenaries, sorcerers, and slave traders known for their calculating (and sometimes duplicitous) ways.

DRAY TRAITS
Use all the dragonborn traits as described in the PHB® with the following exceptions: