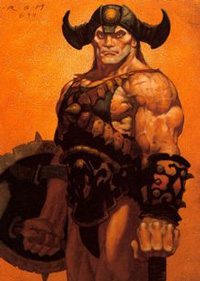 Brutality is a way of life in Athas, as much in some of the cities as in the dwindling tribes of Athas’ harsh wastes. Nibenese sages claim that the potential for savagery is in every sentient race, and the history of Athas seems to support their claim. (DS3)

You get all the class features from the Barbarian class as presented in the PHB, unless noted otherwise.

In Athas you substitute the regular totem animal as follows:

Klar Totem.
The klar looks much like a large kodiak bear with a head that seems a little too large for the body. Its back is covered with a chitinous plate It has a thick, stump of a tail that aids its balance when it stands erect. The klar is large, towering over most Athasian fauna when standing fully erect. Its thick, sandy-colored fur grows as much as six inches long. The klar moves about on all four massive paws. Its long arms reach the ground when erect.
The Klar totem spirit gives you the same benefits as the Bear totem.

Kes’trekel Totem
Kes’trekel are fairly scrawny in appearance, with black plumage graying from the constant exposure. The only spot of appreciable color is found on the head, where the vivid crimson stands out like the blood it resembles. The horrid croak of a kes’trekel is considered a harbinger of death, because these predators gather when a creature is about to die.
The Kes’trekel totem spirit gives you the same benefits as the Eagle totem.

Dagorran Totem
Vicious predators of the wastes, these reptilian creatures are feared throughout Athas. They track the unique traces of sentient minds, running in packs as they relentlessly hunt down their quarry.
Dagorrans are pack predators. A dagorran can latch onto a sentient creature’s mind, whether through direct contact or by stum­bling upon that creature’s psychic trail. The pack is relentless once on the scent of prey, tracking a target for days or weeks before closing for the kill.
The Dagorran totem spirit gives you the same benefits as the Wolf totem.